I found a new vegetable shop nearby my place. They have lovely vegetables from Cameron Highlands everyday as the owner has a farm there.

I bought lettuce iceberg from him as iceberg lettuce is low in salicylate and also low in FODMAP! He told me that it is a common practice for many vegetable sellers to apply oil at the base/core of the iceberg lettuce to further prevent it from rotting.

That was the first time I heard of such a practice.

And then I realised why many times the lettuce icebergs which were kept in plastic bags had solidified/cloudy oil residue at the bottom of the bags. (From supermarkets at many different malls) 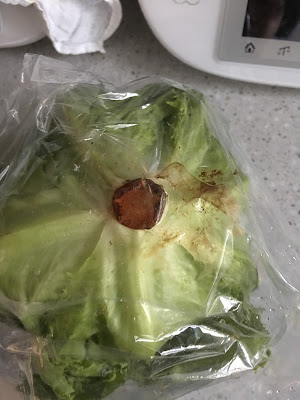 I then asked him what was the oil that he used for this purpose as I can't take peanut oil.

He went to the back of his shop and brought the bottle out to show me.


Have you heard of such a practice? 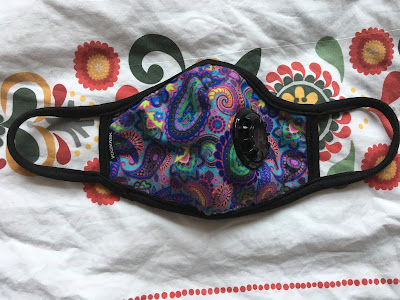 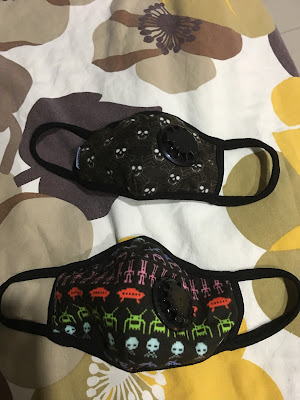 These are masks which have N99 particle filtering media. The masks have a carbon filter for odour too.

These masks have a exhalation valve filter which makes it easier to breathe.

It can be hand-washed but it has a lifespan.

I find that it works better than the cloth masks which do not have the valve filter. The valve filter really does help and makes breathing easier. It's not stuffy and does not heat up. It also filters horrible smells. The only setback is that it is quite pricey as one costs about RM120+ each.

I think it is a good investment. But I only use them when I need to use masks at a long interval. If I need masks for a short interval, I would use the ones without the valves. That way, the Vogmasks can last longer.

To find out more about Vogmask, click on LINK.

The yearly hunt for new EpiPens begins one month before the ones I have expire. This year is no exception.

Imagine my horror when I was told that there hasn't been any new EpiPen stock in Malaysia for the past few months! My usual pharmacist at the hospital nearby told me that she had a patient who was on the waiting list for the past 5 months and had recently given up waiting!

There is only one company which imports the EpiPens into Malaysia and apparently they don't keep any stock of the pens. If there is demand, then only will they bring it in. And bringing EpiPens into Malaysia now requires TWO permits. Miss Pharmacist told me that she would contact the supplier to inquire and keep me updated.

She returned my call and told me that the situation was still the same. Currently there was no stock of EpiPens in Malaysia. I would be placed on the waiting list and no one knows what the time frame of the waiting list would be. She did not know anything beyond that.

I could not accept this kind of answer as it is ridiculous beyond words. The EpiPen is a life-saving drug.

I called the other hospitals to find out what was happening.

Hospital A came back with the same answer. They have not dispensed EpiPens for the past year as there was difficulty getting the pens. The pharmacist at Hospital A told me that they received a memo stating that EpiPens have been discontinued and no longer in production. I told her that this cannot be true. If it is true, what is the equivalent that has replaced the EpiPens? One cannot just leave the patients out there to die.

She said there was none.

I then ask her what do the doctors give patients who have life-threatening allergies when they are discharged from the ERs/wards?

She said there was none.

I almost went ballistic. I know that in UK, every person who has experienced an allergy attack is given an EpiPen when they are discharged. Don't tell me the allergies in Malaysia are different from the ones in UK? Our Malaysian allergies do not kill?! She then asked me whether is it a must for me to have this EpiPen. My blood was boiling at this point. I gave up and hung up.

Hospital B came back with the same answer: no EpiPens in stock or sight.

Hospital C was the same. So was Hospital D.

But all hospitals couldn't tell me why there wasn't any stock.

I then did some research online about this Malaysian pharmaceutical company who is the only licensed supplier to bring in the EpiPens into Malaysia. I called them.

I was asked the same questions over and over again with every new person who answered the call that was transferred:

"Siapa suruh you call kita?" "Who instructed you to call us?"

"Apa pen itu?" "What pen is that?" You must be bloody kidding me to ask me what pen! You're a pharmaceutical company!

And one of them even hung up on me before I could even finish my sentence.

I called back and I blew. I told whoever who answered the phone to stop transferring my calls from one end of the company to the other end. I told the person to transfer me to a person who knows what the hell an EpiPen is and that I want answers and I want them today! And I told the person if they were to hang up on me, they will see me in person. (I got the person's name.)

Yes, I was that pissed.

There was silence on the other end at first and then they transferred me to another department. The woman who answered this time told me that I needed to speak to a particular lady who is in charged of importing of medications. Apparently, only this lady would know what is actually going on. She gave me the lady's contact number.

She was very helpful and professional. And yes, there has been a shortage of EpiPens for the past few months due to the Mylan episode where the auto-injectors jammed and couldn't discharge the epinephrine. Due to that, Mylan stopped their production of EpiPens for a few weeks. Thus, the shortage of EpiPens is due to a backlog of demand. Too much demand and too little supply.

I have kept myself abreast of what was happening with Mylan and its scandal of increasing its prices and its auto-injector failure. But I did not know about this shortage! Miss-Only-She-Knows-What's-Happening told me that it's a worldwide shortage and even if I were to go to neighbouring countries, I would not be able to find one. She said Mylan has not replied her queries on when this would be over. What she can advice is that for us to hold on to our expired EpiPens. They would still function even though they are expired. BUT, you must head to the ER IMMEDIATELY without wasting any time after injecting yourself with the EpiPen. One does not know how much strength the epinephrine has after expiry. She also said that EpiPens have not been discontinued.

My pharmacist from the nearby hospital gave the same advice: Hang on to our expired EpiPens. Use them in anaphylaxis episodes. Head to ER IMMEDIATELY without wasting any time.

I did some online searching and found these:

According to the website above, two Epi-pens Junior are equivalent to one adult dose. Alternatively, one could carry an ampule (filled with epinephrine) and a syringe.

The ER doctor who treated me at the hospital nearby my place told me if ever EpiPens were to be unavailable, there's always this old-fashion option:

Good luck with your quest for new Epis.

By the way, Mylan now sells EpiPens in twin packs. One pen costs RM485. A twin pack would now cost you RM970. 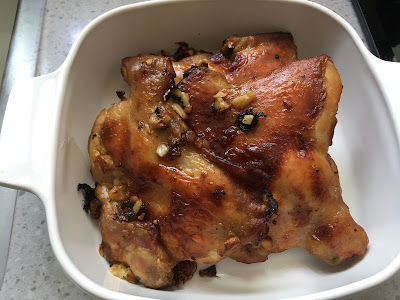 1. 4 chicken chop (chicken thigh/drumstick deboned)
2. 6 cloves of garlic (outer layer removed and chopped into very fine)
3. A few strands of saffron
4. Juice of 1 lemon (you can omit this if you're on a low-salicylate diet)
5. Sea-salt
6. Pepper

1. Mix all ingredients and marinate chicken with it.

2. Place in fridge for a few hours.

5. Place the chicken chops on the baking tray (skins facing down).

7. Turn the chicken chops over (with skins now facing upwards).

8. Continue baking for another 25 minutes.

9 years ago on this very day, my life changed in ways I could never ever dream of. I could never be 'normal' ever again. It was very difficult as I had a child who was at that time, 4 years old. But it was the 4 year-old-child that kept me going.

I can't say that my immune system is 100% back on track. But I can say that I'm much better where salicylates are concerned. And I've managed to wean off my meds. I'm still in the midst of climbing the icy-mountain chemically-wise. Like my immunologist said, "There are tens of thousands of chemicals in the world. And hundreds are being produced in the shortest amount of time. There are no tests in the world to test which ones are causing havoc. You will never find the answer to this. It is a life-long fight. You just have to learn to maneuver your life."

I guess avoidance has done my immune system much good. By avoiding salicylates, chemicals and unhealthy food, it has given my immune system a chance to heal. Not only did my body heal, my soul healed too.

Shit happened. And there's nothing that can be done about it.

But this journey has made me to be so much stronger. Made me to be much more resilient. (My husband promoted me from Woman of Steel to Woman of Titanium!) Taught me to be patient. Learned to let go of a lot of things in life. Learned to finally be confident of who I am and couldn't give a damn of what others think of me. Taught me to finally be free of Fear. And I finally learned what Life is all about. I'm grateful and thankful for this journey.

In ancient Greece and Egypt, the number 9 represents completion. As this journey reaches another phase, may the completion of this era bring much health, peace and joy! 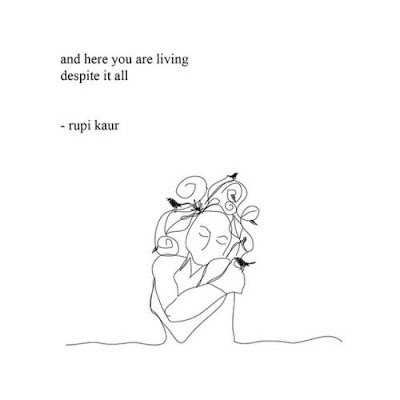 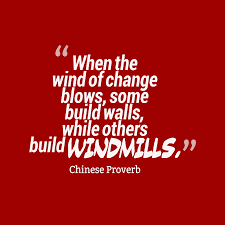 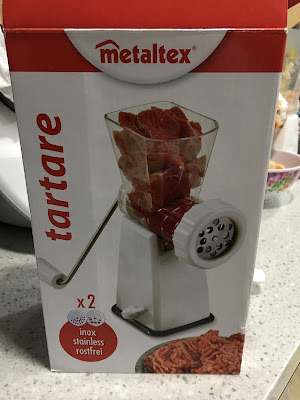 Many, many months ago, a shop which sold kitchenware and utensils had a closing down sale near my place. I got this meat mincer for Joel. I wanted him to experience the "art" of mincing meat the manual way. Haha.... Of course life is made easy with the TMX. But this is good experience for him. This only cost me RM20+. 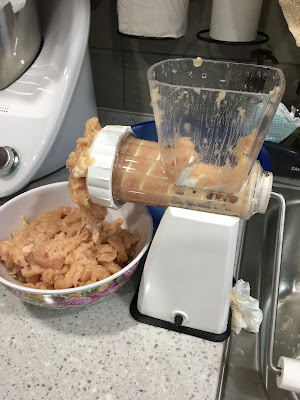